I’ve been a little AWOL here on the blog, but I’m taking my summer plans seriously and it’s already been so good for me.

Today I turn 41. FORTY-ONE. That’s crazy, y’all. I’m not complaining; it’s just crazy. I still have to think every time someone asks how old I am. It seems like I just turned 30. But those rapidly-multiplying silver hairs say differently. 😉 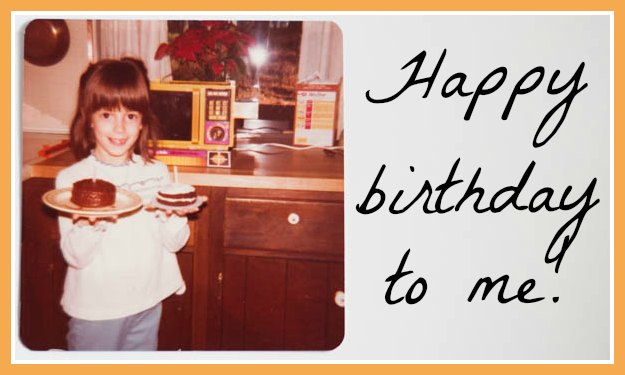 41 things about me {randomly ordered}:

1- When I was born my parents lived in a nearly-condemned house where my dad shot rats through holes in the walls, and the toilet water froze in the winter.

2- They began the restoration process of that home, continued by subsequent owners, and it is now on the historic registry of homes. 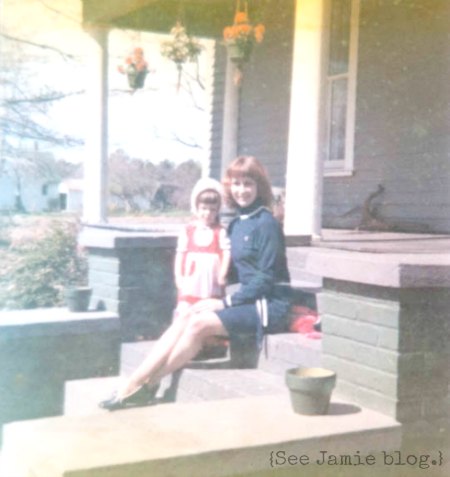 4- My parents helped the campaign to bring “The General” back to its rightful home in our town.

5- The town made national news for legally requiring all residents to own a gun.

7- Although he never taught me to change my own oil, brakes, and so on, I could probably do most of it just from watching so many times during the years I worked at his mechanic shop.

8- In middle school, I broke my arm playing a game called Danish Rounders, which is similar to kick ball. I’ve also sprained an ankle and split my knee open in the same game but on different days. {I’m not very sports-inclined!}

9- I bought my first home at age 20. In that same town that required gun ownership.

10- I am completely creeped out by bugs; one time I sprayed half a can of Raid in a kitchen cabinet full off glassware when I saw a roach in there, then went to my mom’s house and declared I was selling my house and everything in it.

11- I was in a commercial for the NBA, with the Big Bad Voodoo Daddy swing band. {I was swing-dancing, not playing basketball. In case you wondered.}

12- Ken was is the same commercial, long before we were married to each other.

13- I was a ring girl in a charity boxing match.

14- Mohammed Ali was the celebrity guest at that event, so I got to meet him.

15- When my best friend tried to teach me to ride her Spree scooter at age 15, I crashed it into the side of her house after plowing through the flower bed.

16- Years later, I earned my motorcycle license and bought myself a motorcycle.

This wasn’t that motorcycle, but I rocked my Big Wheel.

17- A wicked case of mono my senior year of high school caused me to develop every weird complication imaginable and miss six weeks of school. I’m thankful to the administrators who worked to bypass the typical policy of giving me a withdrawal-fail grade in classes I had to drop.

18- Despite that craziness, I still graduated that year with a 3.2 GPA in advanced and gifted classes, plus 5 hours of college credits.

19- I was so guarded in speaking about personal things in high school, my psychology teacher allowed the student assigned to write my case history to clean his gutters instead. {That teacher probably broke a whole bunch of rules but he was the BEST teacher I had in all my years of school. Probably because he was willing to break rules if it benefited his students.}

20- When I was in high school, we had a small farm with two senior citizen horses and a couple of goats.

21- I’m fascinated by wolves. At one point in life, I wanted to be a wildlife photographer. But then I thought about pottying in the woods and dealing all the bugs, so that dream was short-lived.

22- I was super-shy as a kid. Example: in 7th grade, I hyperventilated when I had to give an oral report in class.

23- Just a few years later, I won my high school beauty pageant. I even survived the Q-and-A portion, which is terrifying because there’s no way to prepare!

24- As an adult, I’ve performed in community theater, playing Miss Stacey in Anne of Green Gables, and Truvy in Steel Magnolias. A far cry from playing a silent monkey (the only role I’d agree to) in The Jungle Book during elementary school.

25- I’ve moved thirteen times, lived in eleven homes, and owned four of them. The funny part about this (to me, anyway) is most have been just a few miles apart.

26- Catching tadpoles and crawdads, playing in the creek, digging up worms and going fishing, keeping turtles and frogs for pets as long as my mom would let me: these were my favorite summer activities as a kid.

27- When I was 17, I decided I’d like to quilt. So I bought a how-to book at Walmart, bought a quilting stand from an old man who started out making them for his wife, and I made myself a quilt. I’ve only made a few small quilts since then but would like to take up the hobby again someday.

28- I despise roller coasters. I’ve only been on one, ever; I always knew I’d hate them but a friend told me I couldn’t hate them if I’d never tried. So I proved my point and never see reason to ride one again. I don’t even like to swing because it makes my stomach feel funny.

29- I can’t not make my bed. I do it every morning, almost first thing. (Sometimes a shower and potty break have to come first.)

31- When I was a baby, I was “tongue-tied” so I had to have the frenulum clipped.

33- I hold my pencil so oddly that nearly everyone who sees me write comments on it. Teachers had a fit about it in school. But it works, and my hand gets tired more quickly if I hold it the “normal” way.

34- One of my teen-years relationships started when I saw a cute guy drive by in a parking lot and left a note on his car with my number.
{Do NOT try this at home, girls.}

35- I’m NOT a seasoned air traveler. I’ve only been on a plane ten times (five round trips), but one was all the way to Africa so I get serious bonus points for that. {Plus, I got an elephant while I was there.}

37- My first car was a Volvo. It had been repossessed so my dad got it cheap. I helped fix it up and despite it’s quirks, I loved that thing.

38- I’ve lived in Georgia all my life and I love it, but secretly fantasize about moving to a sleepy little beach town (if such a thing still exists).

39- I don’t like getting gifts. I don’t like surprises. Too much pressure to be excited. {Exception: plants. I’m always happy to get a plant, and no one expects too much excitement.}

40- But Ken doesn’t care about gifts either, so it’s all good. For Christmas and anniversaries we usually opt to do something together or buy something we both want or need.

41- I bought myself a bicycle for my birthday! 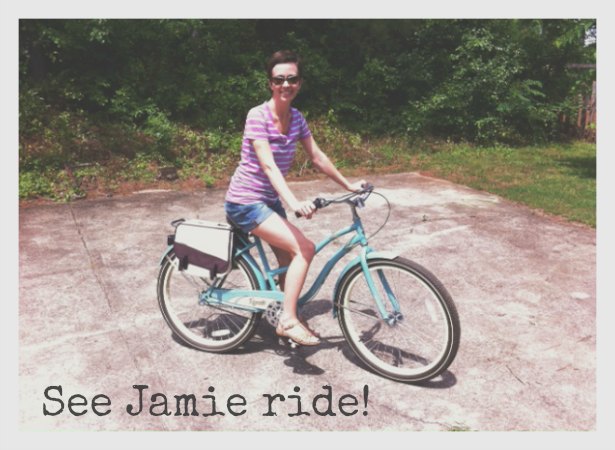 Thanks for humoring my little post. I believe in celebrating life rather than complaining about getting older, and this seemed like a fun little way to do it.

Neat post. I did know a few of those things about you but WOW~! sounds like you had a very memorable childhood and adult life. Happy Birthday!

I guess it does sound like a colorful life. Maybe I’m more interesting than I previously thought? 😉

Happy Birthday Jamie! I loved learning more about you. I didn’t know most of it, but was surprised by very little as it seemed to line up with how I picture you. The gun shooting at 2 was surprising! Love the bike…it suits you!

P.S. So cool that you and Ken were in the same video years ago!

I think I’ll take that as a compliment that these things lined up with how you picture me. And I’m loving my bike! 🙂

Happy Birthday Jamie!! I hope it’s a great day for you! It was so fun to read all the things you mentioned. For being shy, you’ve done a lot of neat things. Thanks for sharing more with us about yourself.

Thanks, Nancy! Yes, I’m still shy but I’ve learned when to stuff it to do the things I want/need to to!

I love GA, too and I’ve lived here all my life (except for college years spent in KY)! Fun and interesting post. Oh, and in your (very pretty) high school pageant photo, you remind me of Alyssa Milano. Happy Birthday!

Ha ha! Funny you say that because during my high school years I heard that ALL.THE.TIME! But she’s gorgeous so I’m not complaining!

OK, this was way too much fun to read. I got to See Jamie Shoot a Gun, See Jamie Win a Beauty Pageant, and See Jamie Act on Stage. Loved learning all this trivia.

Happy, happy birthday. I hope your coming year is filled with all things fabulous.

Thanks, sweet lady! One of these days I hope to see your jet-setting self in person again. And we’ll start that Hip Grandmas thing at some point in the future. 😉

Yes, indeed–on all counts. My jet-setting self has been enjoying a break from traveling. It’s felt good to be home for nearly a month now! 🙂

Happy Birthday! That was fun. I learned some things about you that I didn’t know. I hope you’re having a wonderful day!

This list was fascinating to read. You’ve lived a fun life full of adventure! No wonder you’re a blogger!

I learned a lot of things about you in your birthday post! 🙂 I hope you had a great birthday! P.S.–I don’t know how in the world a person could dislike getting gifts. But we can still be friends. 😉

What fun facts about your interesting life! What a fun way to celebrate your rich 41 years. I have the same trouble with my tummy doing weird things even on a swing, so I don’t ever want to ride on a roller coaster. Happy Birthday!

I’m a little late but happy birthday! What I found really interesting was how much in your beauty pageant photo you looked like Lindsey!

I’m late to the celebration, but I hope you had a wonderful birthday! I’m less than a year older than you, so it was fun seeing the Easy Bake and Big Wheel. We grew up in such a great age. 🙂 Love your bike!

This is great! I love to see how you hold your pencil…my daughter holds hers a very different way, I tried to “correct” her, but she won!! 🙂

I was just reading through some of my old posts and comments and came across one from you.
What a great post for your birthday! Thanks for sharing all the interesting things about yourself.
Blessings,
Mrs.B