One of the moms in our homeschool support group has started a sort of off-shoot group for monthly outdoor adventures that focus on the beauty of God’s creation. Yesterday was the group’s inaugural trip: canoeing on the Chestatee River in the mountains of north Georgia. That sounded like a whole lot of fun, so we joined in!

Extra delightful: my cousin Jonnia is also part of the group, so her son Cullen and her nephew Walker came, too! I still think it’s so cool that Kathryn gets to hang out with her homeschooled cousins! A couple of dads came along, too — including Ken, who took the day off work to come with us! The scenery was amazing, and even though our group was big, once we were on the river, we ended up spacing out so most of the time we only saw Jonnia’s canoe ahead of us, and no one behind us. I’ve canoed once or twice, just in a little cove of a lake. Ken has white-water rafted on the Snake River in the Grand Canyon. But it was the first time canoeing on a river for either of us, and Kathryn’s first time ever in a canoe! 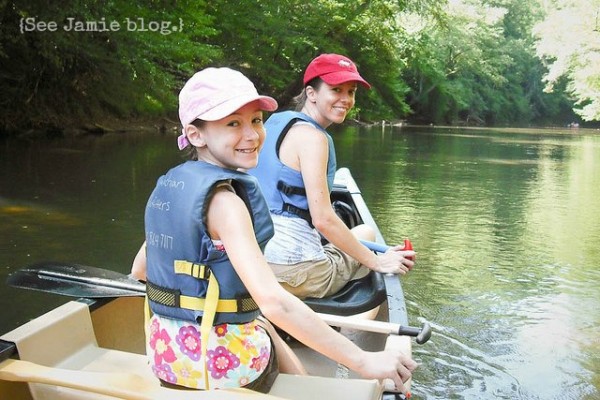 We decided beforehand that we’d be on the lookout for wildlife. I watched for underwater hazards and tried to figure the best way through the rocks on the rapids. Ken was our main steering guy. Kathryn was our primary critter-spotter.

Some of the wildlife we saw included: There’s a little beach at about the halfway point of our six-mile trip, so we all stopped for a break. The idea was to have a picnic, but playing in the river was so fun that no one really wanted to just sit and eat. The kids (and adults) waded and floated in the water, skipped stones, and snacked a little. After an hour or so at the beach, we headed back out for the remainder of our river excursion. We knew we’d have at least another hour or so to go. It was really hot, but much of the river was shaded by huge overhanging trees. Kathryn said it was so peaceful she hated to break the silence, but it was so beautiful she just had to say something. She also said she’d like to live there on the river — even if she had to be a duck. 🙂 On the ride home, I asked Kathryn how I was doing so far on my quest to become a more fun mama. She said this was one of her most fun days EVER.

Today I’m working on a nature journal page myself, partly because I enjoy it and partly to set a good example. I’ve decided to back off for now on requiring Kathryn to do one. I encourage it, of course, but I want the nature studies themselves to be fun and to inspire her to want to learn more. A journal page might help cement the learning, but she’s learning with or without it. At some point, I’ll try to get her back in the habit. But she did write her own blog post about our trip!

The trip looks so fun!

That canoe trip looks like such a great learning opportunity.

What a wonderful trip! This is the best way to encourage a love of nature….actually getting out and experiencing it up close. I loved reading your list of things that you observed and hearing that you are trying to start a journal of your experiences. It really does take it to a new level. I think it is perfectly fine to offer the opportunity to journal but not force it. We don’t always journal everything but now that the boys are older, we can still call to mind observations of subjects from the past. I think talking about the things… Read more »

Phyllis at All Things Beautiful

Canoeing on a river can be so beautiful. I love your list and am looking forward to seeing your nature journal pages. I have found that my participation and enthusiasm for journaling has done more for encouraging my children to do one of their own than anything else.

Oh I’d love to go canoeing with my kids, I think they’d love it. One day perhaps. Sounded like a wonderful day.