Field trip number two for this year was to the Sheriff’s Department. My seven year old liked this one even more than our tour of the shorebird hospital. Kathryn and I enjoyed both and learned plenty, although I think the parts that impressed us were not necessarily the same parts that impressed him!

We started our tour with a demonstration by one of the K9 units. We love dogs so this was fun to watch. They have jail dogs (including a rescued pit bull), bloodhounds for tracking missing people, explosive detection dogs, and patrol/narcotics detection dogs trained to sniff drugs as well as take down and hold a suspect who runs away.

The dog who did the demonstration is a Belgian Malinois; his mannerisms reminded me so much of our Piper! After seeing this dog, and hearing another officer describe his Dutch Shepherd (a breed closely related to the Malinois), any doubt I had about Piper’s primary breed is gone. She’s definitely got a whole lot of “Dutchie” in the mix.

Does your Sheriff’s department have an air boat? Ours does! Gotta love coastal living. This thing has a Corvette engine and can go in only two inches of water. They use it primarily for search and rescue, and it can even tow a small boat. 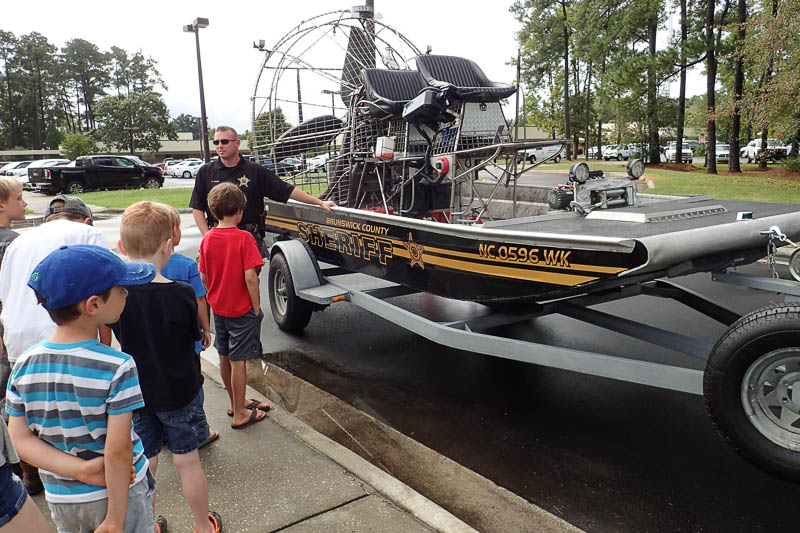 My boy LOVES motorcycles. Every time we see one, he pipes up to yell, “Motorcycle!” Thankfully, I’ve gotten him to tone it down a bit because a few years ago he’d scare me half to death with that while I was driving!

Anyway, we got an explanation of why motorcycles work better than patrol cars for some things, like seat belt violations: they can simply see better. Plus it can go in and out of traffic, and manage a parade, better than a car. This thing even has a printer in the back if they need to issue a ticket! The helmet is amazingly high-tech, too, with all the things built into it. 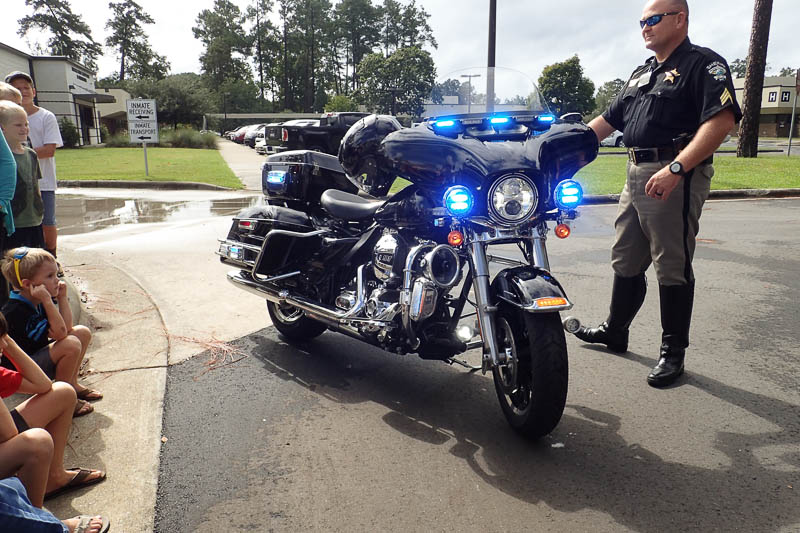 After all the excitement outside, we had a demonstration of how they do fingerprinting at a crime scene, using the kids’ fingerprints on a cup. To finish up, we toured the actual office. Everyone we interacted with was so kind and helpful, and they did a great job tailoring what they talked about according to the kids’ ages and questions. But it was a bit sobering seeing the black stripe on all their badges to honor an officer in a neighboring town who was killed earlier that week.

This tour was organized by a local homeschool group, so I was delighted to meet more homeschooling moms. We’re already looking forward to the next field trip we have planned with this group!

I love the new look of your site! We had a couple of officers from our sheriff’s department do a K-9 demonstration for our homeschool group one time. Their dogs were Belgian Malinois, too. Beautiful dogs and so intelligent!

Thanks, Kris! The only downside of seeing that K9 demonstration is I realize how well-behaved Piper COULD BE if I was more diligent about spending time training her!