We’re a few months into our homeschool year, which means we’re far enough in to see what’s working and what isn’t. Although I don’t do any formal sort of mid-year review, I do try to stay tuned in to my kids so I can tweak our plans and schedule as needed, no matter what time of year. 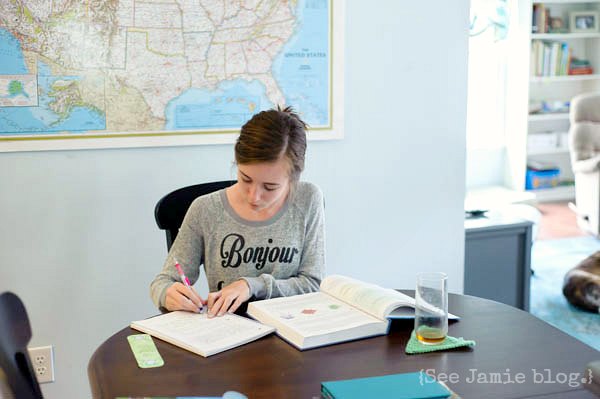 Kathryn is really enjoying Apologia’s Exploring Creation with Marine Biology. It’s challenging high school level material but not presented in what Kathryn calls a “professory tone.” I knew she was thoroughly reading it when she launched into an explanation of the moon’s effects on the tide — using a salt shaker, my tea mug, and an apple — while we were on vacation at the beach. Every time she reads part of a module, she’s excited enough to tell me {unprompted!} about something she’s learning. This is the most advanced text she’s used, and she’s doing this entirely on her own, which shows me she has a nice balance of relaxed but challenging education happening.

Although Kathryn does not love Seaside Naturalist, I decided to eliminate some of what I’d assigned her to read rather than throw out the whole thing. In theory I liked it’s nature journal feel, but Kathryn doesn’t like the way it’s written.

Math is not Kathryn’s favorite subject but TT Pre-Algebra is still working well for her. Teaching Textbooks was a breakthrough for us back in 5th grade after we’d stumbled through a variety of other math curriculum; it’s what brought her back from hating math so it’s been well worthwhile for us.

Most everything else in our original plans is still working well, but I’ll continue to update. So far all the literature has been a hit, but I’m feeding her those books a bit at a time or else she’d read them all in a week!

Homeschool for the younger two looks a whole lot like unschool around here, so I’m not even checking boxes on what we do. We do workbooks some days, and we don’t do them other days. I let the kids play outside when possible (yay, fall!), Jem builds trains and LEGO creations daily, and Scout is always writing, drawing, or copying something into a notebook. So it’s all good, and they’re most certainly learning. {See this year’s elementary plans.}

I confess we haven’t been doing many of the read-alouds I have planned, but I know from previous years that we’ll catch up when the time is right — like when rainy wintry days come and snuggling up on the sofa is the best idea. 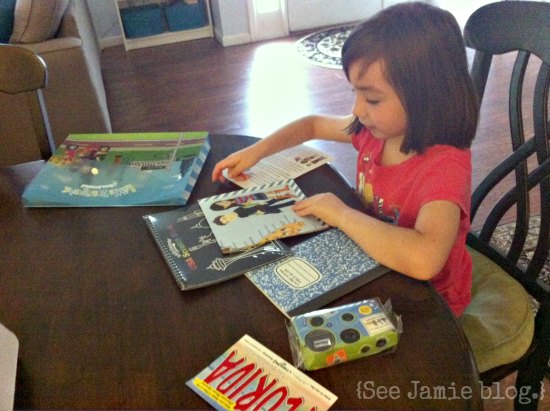 While Little Passports USA Edition is fabulous, I’ve realized it’s too old for Scout. I should’ve heeded the suggested age range of 7-12, and realized she’s a little “younger” than many kids her age so this was pushing it too much. We did a few months but this week I canceled our subscription. However, after taking a little break, I plan to do a subscription to the World Edition instead; it’s recommended for ages 5-10 so I think it will fit her just right.

Both girls are still enjoying Choi Kwang Do, as well as their other enrichment classes. I like that Scout is in a class about the solar system, which give her opportunities to talk about things like moon phases with resident astronomy geek Kathryn.

Our KiwiCrate trial went well, so I’m considering a subscription but I haven’t decided which one because there are so many new choices! They’ve expanded their options from the koala crate for preschoolers all the way up to the doodle crate for teens. If you’re interested, use code OCTOBER25 for 25% off your first month’s subscription — but that coupon code ends TOMORROW!

Kathryn is almost always crocheting something; as soon as she finishes one project, she starts another! She’s been teaching Scout, which is fantastic because I’ve found that doing something with her hands is enough to enable my wiggliest child to sit still enough to listen to a read-aloud without being fidgety.

If you have wiggly kids, you may enjoy Homeschooling the Active Child, an iHN hangout hosted by yours truly. 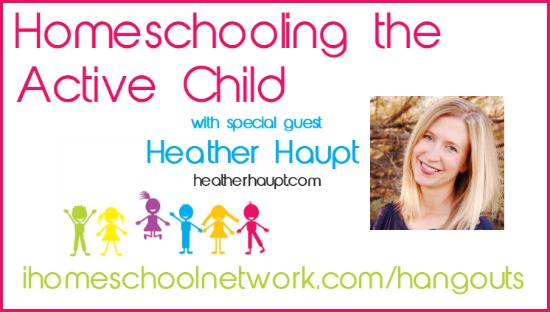 I really enjoyed hearing advice and input from Heather and Ticia. Even though I’ve participated as a panelist before, this was my first time hosting. Feel free to make fun of my facial expressions because I am a goof, y’all!

Piper the Bat Dog is still a handful, but lucky for her, she’s ridiculously cute. She is evidently intent on helping me achieve minimalist decor by destroying every rug in the kitchen. {And part of a wall.} But she’s great on walks and riding in the car, so that’s something! 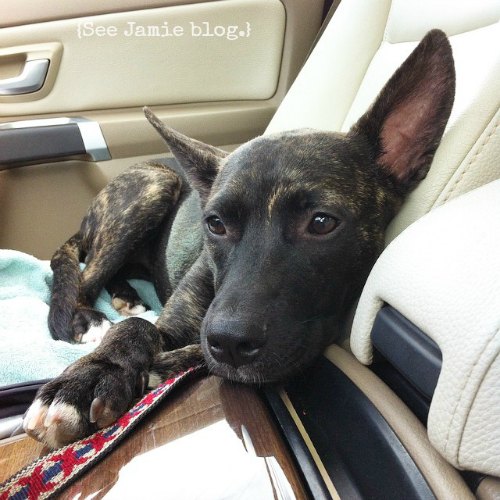 We attended a wedding for one of my cousins last weekend. It was the first wedding the kids have been to, and Scout was duly impressed because when you’re 7, a bride in a fancy gown is just about as close to a real princess as it gets. And since my cousin is fantastic, there was a full Big Band orchestra at the reception so Ken and I hit the dance floor and the kids were wowed by our swing-dancing. But when we got them out on the floor, too, it was the highlight of their night. {Followed closely for Jim by the tickly bubbles in the sparkling grape juice he drank from a champagne flute for the toast!} If you’re ready for the cutest 6 seconds of your life, check out 5-year-old Jim dancing with my mom after I taught him how to ask a lady to dance.

And also, since several of you have asked, Lindsey is still trying to figure out what she wants to do with her life, but we do see and talk to her. The day Kathryn got braces, we met Lindsey for lunch and I made sure to take a pic with my big girls. {Random thought: shouldn’t a group selfie be an “usie”?}

** I’ll be linking up with these lovely weekly hostesses:

I just love your updates. That is one cute dog. And, hey, that wall was probably about ready for some updates anyway. (I’m just trying to defend Piper. For all I know, you just painted the wall last week, so my comment is not a commentary on your home decor. ;))

Love reading about what all your kids are learning and doing. All that interest-led learning is the stuff my my homeschool daydreams.

Not so sure about the wall but I was thinking I was tired of red rugs in the kitchen so she did take care of those for me!

I am so glad I found your blog! My daughter is only nine months old, but every time I read your homeschool posts, it makes me want to start now!! She loves the ABC song at least 🙂

Aw, thanks for the sweet words, Kristen. And ABC song or not, you’re already homeschooling!

Jessy @ Our Side of the Mountain

I can’t wait to get back to Apologia Sciences! We’ve switched it out for something more “secular” the last couple of years and I miss Apologia’s “feel”. It seems like your daughter enjoys the “feel” of it too!

I have read your blog for quite a few years and have really enjoyed it! I have been “formally” homeschooling my only for 6 years now. I have really appreciated reading about what works for you and what doesn’t and how you do a relaxed form of homeschooling. I have a question. You mentioned switching to TT for your daughter around 5th grade and that it has really helped her not hate math. That is where I am at with my daughter and math. It’s not that she can’t do it, but she just tells me she hates it and… Read more »

Hmm… it’s hard to name one thing. Partly, the lessons are about as much fun as math can be. Partly, there aren’t as many problems. Partly, although I might have to help, it removes me as the primary teacher which removes some of the head-butting we’d sometimes have. Hope that helps!

Great “usie”…so beautiful! Nice to see your recap and thoughts on the curriculum. Always and forever changing around what we do..beauty of homeschooling! Huzzah to your weekend.

We just started Teaching Textbooks this year (grade 5) and my daughter is really enjoying it too.

Little Passports World Edition is lots of fun – my daughter really enjoyed her subscription. I’ll have to check out Kiwi Crate – sounds like something she’d like.

Yes, I think she’ll really like the World edition. And in a few years, we’ll do the US edition. And yes, Kiwi Crate is a lot of fun; all stuff I *could* do myself but I often just don’t!

I hadn’t seen the name of the blog I was reading (because I had 10 tabs open and was just moving down my line to close stuff), and then I read my name and said, “Hey, I know that name,” and scrolled back up and said, “Oh wait a second, I WAS just talking with her.”
I’ve been looking at some of the newer options in Kiwi Crate too, the tinker kit looks pretty cool to me.

Ha ha! It was nice chatting; hope to do it again soon! 🙂