Y’all! I did it!
Along with over 1,000 other participants, I ran a half marathon. Me: the wimpy, asthmatic runt who was nearly always picked last when we divided up for teams in elementary school; who managed to sprain, break, or somehow injury something every single year (week) in P.E. class; who never played a sport or willingly participated in any physical sort of event or activity, ever.

My time was 2 hours 46 minutes. I could look at how slow that is when compared to the first-place woman who ran it in less than half that time. But instead, I choose to look at the fact that I ran nearly three hours and did not die. Or quit.

I’d trained for MONTHS for this race, so I was determined to DO THIS THING. Receiving my medal from a Marine in dress blues at the finish line was one of the highlights I was looking forward to. The medal is delightfully substantial: a good thing since I worked so hard to earn it! 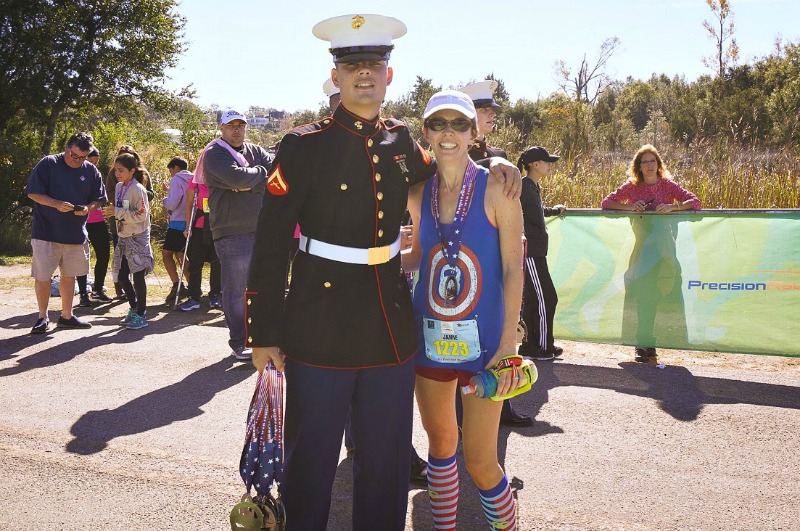 How it felt: physically

My biggest concerns in the weeks leading up to the race were foot pain and knee pain. I knew the knee pain was from pushing my distance too much too soon when I got off my training schedule with my out of town trips. The foot pain is from a Morton’s neuroma; oddly enough, it had lessened lately but flared up again big-time last week.

A few days before the race I started having the weird feeling in my chest that usually means a chest cold trying to start. It wasn’t bad, but with my asthma, a little thing can quickly turn into a big thing. I kept thinking of how sick I was with bronchitis this time last year, when I could barely function for more than three weeks.

To top it all off, I tweaked my back the day before the race and was having a lot of pain with every move. I didn’t sleep well that night mostly due to back pain but partly due to a variety of crazy race-related dreams. 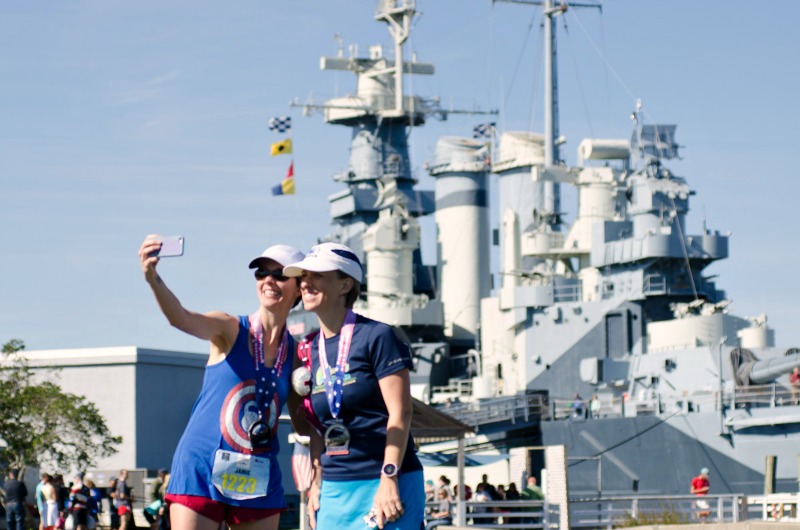 For extra motivation, a more experienced runner-friend came all the way from Georgia just to run this race with me. She is much faster than I am but she volunteered to run with me at my pace strictly as a running buddy/encourager. Plus, a blogland friend was coming to run this as her first half marathon, too; we’d been virtual training buddies so although we weren’t running the whole thing together, I was looking forward to starting with her. 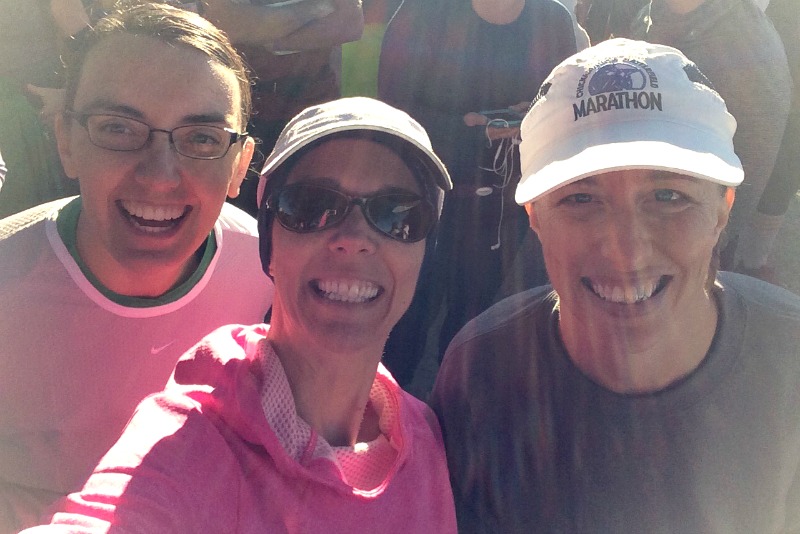 The morning was chilly — in the 40’s — but we knew it would near 70 degrees by the time we finished so it was hard to figure out what to wear. Thankfully, the race organizers said (in an informational email) to wear a “throwaway” sweatshirt and if we left our extra layers at any of the water stations, they’d donate them to Goodwill. Problem solved. Yay!

My foot pain didn’t start til mile 10, which is much better than usual. Around mile nine I started feeling an almost-cramp in my calf muscle but it wasn’t bad enough to stop running. I’m 99% sure I had this problem because I didn’t train enough on hills (hard to do around here) and the course had more hills than I’d anticipated. Back at home that day and the next, I walked like Godzilla due to calf pain; it was much improved by the second day thanks to rest, ice, and gentle stretching.

I shed my sweatshirt around mile 3 and was plenty warm but not overly sweaty for the remainder of the race. My knees had no real pain at all, thanks to giving myself plenty of rest in the two taper weeks prior to the race.

How it felt: mentally

More than anything, running is a mental challenge. To a very large extent, what ultimately happens physically depends upon what’s happening in your mind.

Talking with Meredith was a good distraction. So was people-watching, and taking in all the scenery in downtown Wilmington as well as the wooded areas surrounding Greenfield Lake Park.

I ran up all the hills. I didn’t get emotional but I did think of my Dad on every hill, and had mini conversations in my mind imagining how I’d describe the race or the hills, etc., to him, and trying to tell it humorously so he’d laugh.

An older gentleman named Sid Busch, a retired Navy man, carried a flag the entire way with a photo of a fallen soldier pinned to the back of his shirt. He has run over 200 marathons and a slew of other races in honor of fallen soldiers. That was humbling. 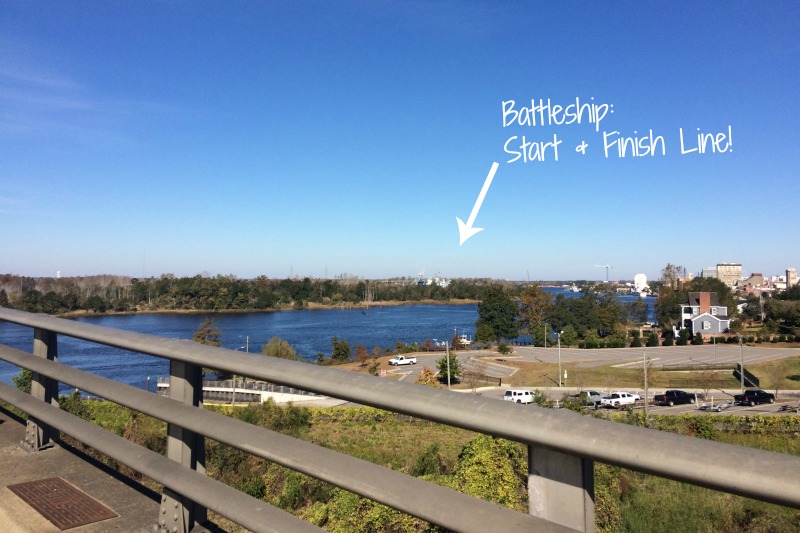 The metal grate portions of the drawbridges were strange to cross on foot. I walked those parts. I don’t even like driving over them. On the last, longest one, I could feel the whole bridge swaying. On the up side, I could see the battleship from there, which meant we were almost back to our starting point.

I finished strong, with my last mile being the fastest one in the entire race. This photo is proof I wasn’t even last!!! 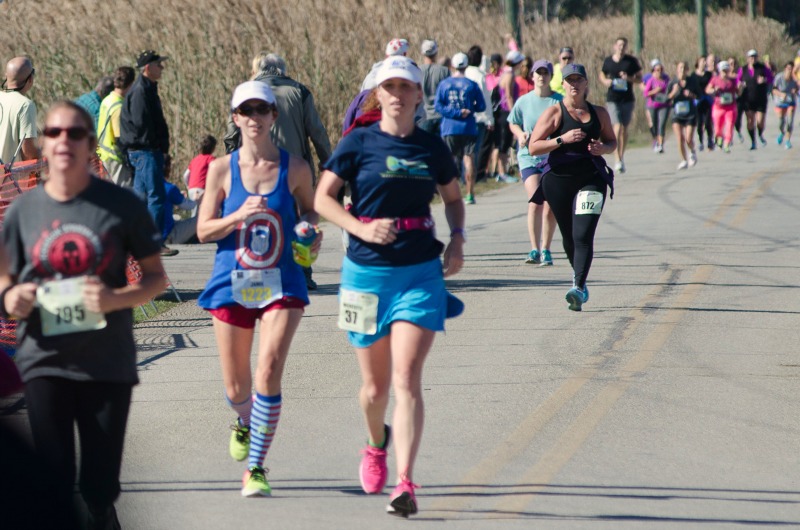 Another victory to celebrate:

The weekend before the race, I passed my certification test as a running coach! The test was long and hard but I scored a 95% and I’m delighted to add this certification to my personal trainer credentials.

Congratulations! It’s such a wonderful feeling when you realise how close you are to the end, and how far you have already come. I remember thinking during my last mile, “For every step I still have to take, I’ve already taken more than twelve,” which was very encouraging! I could barely walk the next day though… Your time is pretty good especially if the last mile was your fastest – you didn’t burn yourself out early like some people do 🙂

That’s awesome Jamie! I can so relate to your first comments about being small as a child, being picked last and not having played a sport. That’s me and now in my late 40’s it’s so easy to stop something before even trying because with my first ache or pain I get fearful that I overdid. So thanks for sharing how you felt & not letting your readers think it was all easy. You persevered and I appreciate your honesty. That’s inspiring! ?

Way to go, Jamie!! I’ve never even considered running a marathon– I’m about as un-athletic as it gets–but I have incredible respect for those of you with the determination and dedication to train and then actually do it. Proud of you!! Thank you for sharing your experience with us! 🙂

Congratulations! It’s such an amazing feeling to run a half marathon. I love the idea of being able to shed layers at the water stations to be donated to Goodwill. I’m going to suggest that to race organizers in my area.

Way to go!!! Thanks for stopping by my blog and directing me over here. So, have you signed up for your next half yet!? This one was a great one to do as your first. Way to finish and not give up! Time never matters as it’s always about the finish!

Thanks, Chelsea! I haven’t signed up yet but only because I’m trying to decide if it’s realistic to sign up for a 4-race series that’s near me! The BAM series, if you’re interested.

Congratulations on finishing! I love this post so hard! Your outfit was rock solid.